Apple recently released Safari 4. Being the model geek, I decided to give it a spin — and I liked what I saw. But here’s the problem: at this point I have a deeply ingrained web browsing workflow. Whether it’s a habit or a plugin, there are certain things that are this point muscle memory (and for a good reason, because it usually is the most efficient). 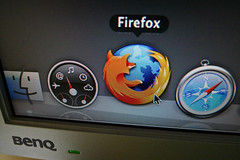 Middle Click opens new tab -- Firefox and Safari do this for normal links, however in Safari I can't middle click on the home button in the toolbar to open a new tab to my home page.Middle Click closes tab -- Safari fails here. There apparently is a hack but the web site is blocked at work, so I haven't tried it (note, that every extension for Safari is a hack... I have no idea how stability is affected, so I've been trying to avoid them when possible)

vim-like search -- Firefox adopted vim's style of quickly searching using the "/" key. I love this, and as a vim user it comes very naturally. Hard to give this up. However, Safari get's props for dimming the window and highlighting what you're searching for. I can do without this, but it I have the placement of the "OpenApple" key on mac keyboards -- it forces me to contort my wrist.

Delicious -- This is a big one. Delicious is my bookmark manager of choice, and this becomes Safari's biggest failure. There are Safari hacks for Delicious support, but none add the Delicious toolbar where I can set my favorite tags.

Sticking with Firefox. One of the reasons I’m not tempted by Chrome is there isn’t the same level of customization that Firefox currently allows. At least Google is moving toward supporting plugins — I don’t think Apple will ever allow that with Safari. I’m hoping for a high quality Firefox 3.5 release!