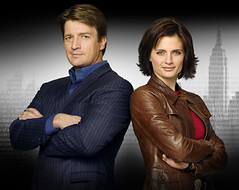 After weeks and weeks of rumors, ABC announced they would renew Castle for another season and Fox agreed to pick up Dollhouse (though still sticking it in the “where shows go to die” Friday night time slot). Unfortunately, Terminator - The Sarah Conner Chronicles will not be picked up after a “fragmented” two season run surrounding the writer’s strike.

Castle has been the best show on TV this spring, hands down. Just the right amount of snark & wit with feel-good humor. Even the supporting characters have some snappy lines, though Nathan and Stana definitely steal the show. This show is much better than any “paper thin” CSI spin offs. Just relax and enjoy the fun story, characters and witty dialog.

While Dollhouse was mixed, it ended very strong. If you are picking up the show now (since you’re assured it’s not another Whedon one-and-done), wade through the first half of the season to pick up on all the plot points — the best episodes are 6-12. Supposedly there is a 13th episode that will air either this summer or included with the DVD release that gives more hints on what’s to come in season 2. Dollhouse is definitely Whedon’s darkest and most “complicated” series in terms of good vs. evil. As it turns out, there are no good or evil characters — only characters. You don’t know who you’re supposed to be rooting for, and things spin away from you when you think you know where the show is going. You just have to get through the first six episodes (which obviously have Fox executive finger prints).