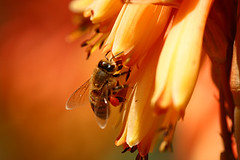 This story has been all over the news lately — Bees are disappearing for no explainable reason. Just take a moment and realize that a large percentage of our food is dependent on a small insect who’s function we can’t artificially replicate. This is just one of the handful of things that if happened, we really couldn’t fix. Another example is a asteroid collision — maybe in a decade or so we’ll have the early warning system and then some sort of divert capability. Or a super virus… Those things that just make you fell powerless.

I would find it ironic if EM signals from cell phones were to blame for this, and there was a huge call to ban the current generation of cell phones. I’m positive it wouldn’t kill the industry — just requires finding a band in the spectrum that doesn’t have any other adverse consequences. But given all the EM noise out there now, I’m surprised there hasn’t been more unexpected side effects.

My grandfather had a couple of honey bee hives on his ranch that he leased out to keepers. I never did (and still don’t) like honey, but I was told that the fresh honey was really good.