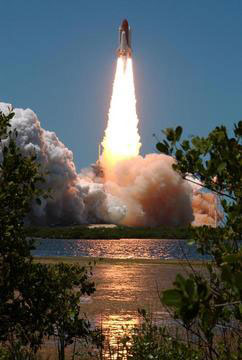 As disappointed as I am with what NASA has done (or more accurately, hasn’t done) since the 80’s, there is still something awe inspiring about moving men and women into space, that I don’t believe will ever get old. I am someone that can still watch Apollo 13 over and over because of the triumph that it represents.

Unfortunately, the bureaucracy at NASA and the lack of foresight and funding from Congress has relegated the one great United States Space Program to an after thought… A political liability… And probably many other things that don’t get revealed to the general public. Since the termination of the Apollo program, the United States Space program has not gone beyond an LEO (basically).

As a kid, I can remember watching the Challenger disaster live on TV (on one of the few stations actually broadcasting the launch live). The Columbia disaster unfolded at a band meeting at Duke. We were in the Poly Sci building and were trying to find a classroom with TV and some sort of cable or broadcast feed. I believe the tragedies could have been avoided. There were/are too many levels to the NASA bureaucracy (too many managers in the closet). Challenger was literally the text book example of Group Think. Columbia was believing that past successes translated into future successes and management stifling engineering.

At the same time I believe the media trivializes the risks involved in space flight. Until something like the Space Elevator comes along or alternative technology that doesn’t involve strapping thousands of tons of liquid explosives to yourself, there is no way you can reduce the risk. Its an amazing feat they accomplish now with as few tragedies as we’ve had. While we stick with current technologies, space flight will never be equal to air travel. Its a little disappointing that we haven’t make it further in the 40 years since the Apollo program.

Thankfully the Discovery launch went off without a hitch and that is exactly what the program needed. They are finishing a detailed inspection of the shuttle’s heat tiles, and while I haven’t heard the results, I hope they don’t find anything. The kicker will be if they can land without any issue. Godspeed.