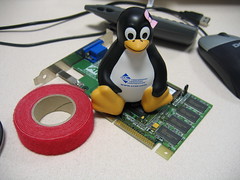 Kubuntu 09.04 (Jaunty) has been an absolute pleasure to use on my home desktop. Everything just works, and works really well. I happen to choose an Nvidia graphics card when I put it together. Turns out that was a very good decision.

Lets turn to my laptop (a Thinkpad T42). It has an ATI Radeon Mobility 9600 inside. There is a semi decent open source driver implementation that it used by default. However, for some reason I’m running into crashes. Ubuntu upgraded their Xorg X server, so ATI’s Catalyst driver (version 9.3) no longer works. Theoretically, this should be fine — ATI is coming out with version 9.4 — however ATI made the decision not to support their older cards with version 9.4! And they’ve said they won’t update their 9.3 driver to work with the latest Xorg version! Arg!

I think I’m basically screwed. Any new linux install (no matter the distribution) will have this latest Xorg — there is just no way I can use this laptop with the latest distros! I’m probably going to reinstall it with 08.10 (Intrepid) so at least I have a functioning laptop.

I wonder… will ATI’s 9.3 driver work with Windows 7? If it doesn’t, they are also screwing over all the Windows users out there to the same fate.